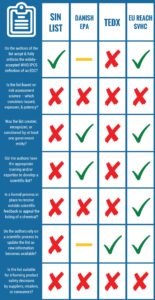 The French press reported at the end of July 2017 that the French government had produced an “official list of endocrine disruptors.” With the addition of this list, at least 25 individual lists from the around the world now purport to “officially” identify what may be known as “endocrine-disrupting chemicals” (EDCs). Unfortunately, these lists largely fail to adhere to basic scientific principles. In fact, the widespread release of these lists in the public sphere does little to advance public health and may even work against it.

The U.S. Environmental Protection Agency (EPA) is widely regarded as the world’s leading authority on the endocrine disruptor issue because it has administered the Endocrine Disruptor Screening Program (EDSP) since the late 1990s pursuant to the Food Quality Protection Act of 1996 and Safe Drinking Water Act Amendments of 1996. This program has developed and validated screens and tests for ascertaining whether certain chemicals are endocrine disruptors. EPA’s dedication to the scientific process provides a clear answer so far: science does not yet support a list of “endocrine disruptors” at all.

EPA has developed a list of pesticides and other substances to put through EDSP screening and testing, but the agency has been careful not to characterize this as a list of endocrine disruptors or even potential endocrine disruptors. EPA’s list is a set of priorities for endocrine screening based on exposure potential. EPA has begun screening chemicals – mostly pesticides – for endocrine activity, but has not yet identified any chemicals as endocrine disruptors. (Today, the program is on schedule, continuing its work in accordance with the 2015 policy announced by the Obama administration to incorporate validated, high-throughput assays. A scientific advisory panel will report on its progress in November 2017.) The way in which EPA has addressed the endocrine issue demonstrates how the 25 lists referenced above fall short of scientific integrity and trammel public health.

Science does not yet support a list of “endocrine disruptors” at all.

Chemical lists can be created by politicians via legislation without a scientific basis or by anyone with a computer. As a result, they are often mischaracterized as accurate and reflective of the science on EDCs or as definitive classifications of EDCs.

Tempting as it is to organize actions based on listing processes, governments and their regulatory agencies must take care to explain what these lists are, what they are not and how they will be used. Regulatory agencies have an obligation to be honest with the public about the scientific basis for any lists they use to direct regulatory actions. Unfortunately, agencies often base lists on inconsistent definitions and criteria, use a hazard-only approach and/or ignore scientific detail. The results can mislead the public and pressure markets into making chemical substitutions that do not benefit public health.

In 2016, the United Nations Environment Programme (UNEP) commissioned the International Panel on Chemical Pollution (IPCP) to research and identify every list of EDCs that had been published to date – including from governments, private groups, and others – and compile them into a single chemical database. To the astonishment of many, the IPCP found 24 self-identified EDC lists floating around in the public sphere.

The project found that many of the chemical lists were not created independently of one another, meaning some lists were based on other lists, and those lists may have been based on other lists still. The inter-dependent nature of the lists might have initially given the impression that the creators of the lists independently reached the same conclusion about the substances appearing on those lists. In reality, what some may perceive as agreement between separate sources does not actually exist.

The project also found that all 24 of the identified lists failed to meet criteria sufficient to establish scientific credibility. For example, at least nine issues contributed to the overall unreliability and lack of utility of the lists included for evaluation in the draft UNEP-IPCP report. Lack of credibility of these sorts of EDC lists does not serve the public interest.

France’s list of over a thousand “EDCs” appears to fail on some of the most common problem areas discussed above, similarly demonstrating a lack of scientific credibility.

This list appears to have been compiled with a hazard-only approach. No accompanying material explains how real-world exposure scenarios and potency might affect an individual’s susceptibility to any of the listed chemicals. The French list also ignores basic details that would support a scientific determination that the listed chemicals indeed produce adverse effects by way of endocrine mechanisms. Finally, this list may now encourage deselection of certain products containing the listed chemicals on the assumption that those products are now unsafe or that substitute products are, by default, safer.

Ultimately, the French “official list” of EDCs officially undermines the scientific credibility of the French government’s approach to the endocrine issue. The public deserves better.

Richard A. Starr is a manager in the American Chemistry Council’s Regulatory and Technical Affairs Division, focusing on health, product and science policy, in Washington, D.C.

Stewardship and Safety Go Glove in ...

The War Against Hunger